1. Read the passage given below.

I saw ‘Jaws’, the popular shark movie, the summer it came out, in 1975 and became paranoid about sharks. Though I kept swimming after Jaws, it was always with the vague fear that a shark’s teeth could tug on my leg at any moment. Never mind that there’d been only two shark bites since 1900on the Connecticut coast, where I lived.

So, when I got this assignment for the National Geographic magazine, I decided to accept and do what I’d never wanted to do: swim with the sharks. I had to go to a place in the Bahamas known as Tiger Beach and dive with tiger sharks, the species responsible for more recorded attacks on humans than any shark except the great white. It was to be my first dive after getting certified—which meant it would be my first dive anywhere other than a swimming pool or a quarry—and without a diver’s cage. Most people who got wind of this plan thought I was either very brave or very stupid.

But I just wanted to puncture an illusion. The people who know sharks intimately tend to be the least afraid of them, and no one gets closer to sharks than divers. The divers who run operations at Tiger Beach speak lovingly of the tiger sharks the way people talk about their children or their pets. In their eyes, these sharks aren’t man-eaters any more than dogs are.

The business of puncturing illusions is never just black and white. My fellow divers had hundreds of dives under their belt and on the two-hour boat ride to the site in the morning of our first dive, they kept saying things like, “Seriously, I really can’t believe this is your first dive.” All this was okay with me until I reached the bottom and immediately had to fend off the first tiger shark, I had ever laid eyes on. However, when I watched the other divers feeding them fish and steering them gently, it became easy to see the sharks in a very benign light.

I think it would be unfair not to mention that though tiger sharks are apex predators. They act as a crucial balancing force in ocean ecosystems, constraining the numbers of animals like sea turtles and limit their behaviour by preventing them from overgrazing the sea grass beds.

Furthermore, tiger sharks love warm water, they eat almost anything, have a huge litter and are the hardiest shark species. If the planet and its oceans continue to warm, some species will be winners and others will be losers, and tiger sharks are likely to be winners.

Based on your understanding of the passage, answer ANY EIGHT questions from the nine given below.

2. Read the passage given below.

Changing food preferences have brought about rapid changes in the structure of the Indian diet. The rapid proliferation of multinational fast-food companies and the influence of Western culture have replaced traditional home-cooked meals with ready-to-eat, processed foods thus increasing the risk of chronic diseases in urban Indians. Therefore, nurturing healthy eating habits among Indians from an early age would help to reduce health risks.

To date, little is known about the quality and quantity of foods and beverages consumed by urban Indian adolescents. This lack of evidence is a significant barrier to the development of effective nutrition promotion and disease prevention measures. 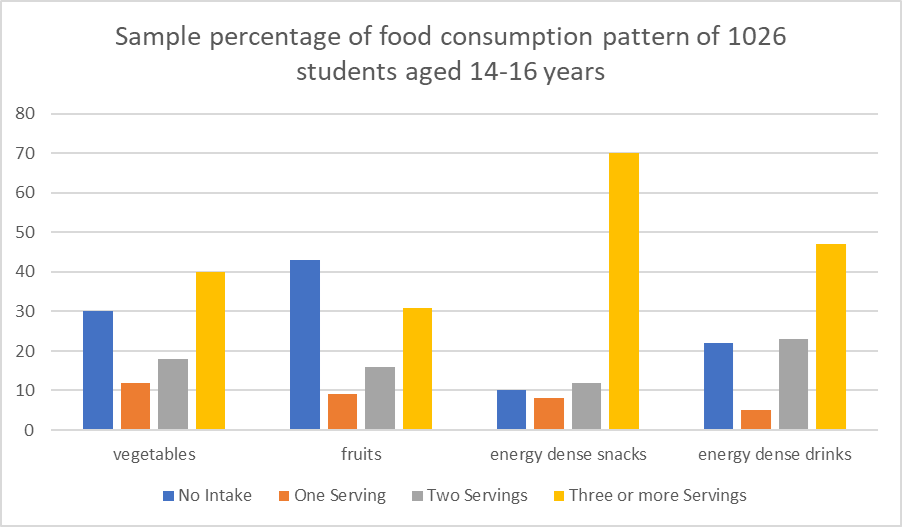 A sample percentage of the food consumption pattern is displayed (Fig. 1) The survey results report poor food consumption patterns and highlights the need to design healthy eating initiatives. Interestingly, while there were no gender differences in the consumption of legumes and fried snacks, the survey found more females consumed cereals, vegetables and fruits than their male counterparts.

In conclusion, the report suggested that schools ought to incorporate food literacy concepts into their curriculum as they have the potential of increasing the fruit and vegetable intake in teenagers. Additionally, healthy school canteen policies with improved availability, accessibility, variety and affordability of healthy food choices would support the consumption of nutritious food in students.

Based on your understanding of the passage, answer ANY SIX questions from the seven questions given below.

3. You are Natasha, residing in Pune. Your cousin, from the same city is hosting your grandmother's eightieth birth anniversary and has extended an invite to you. He has also requested your assistance for arrangements needed. Draft a reply of acceptance, in not more than 50 words.

I am glad to hear that you have decided to celebrate grandmother's eightieth birth anniversary with such fervour. Thank you for inviting me. I would be delighted to attend the same on 17 Jan 20XX. Do let me know if you require any assistance, I would be more than willing to help out.

4. Attempt ANY ONE from A and B given below.

You are Shantanu, residing at Ghar B-94, Balimela Road, Malkangiri. You come across the following classified advertisement in a local daily. Write a letter, in about 120-150 words, applying for the position of a volunteer for the Each One Teach One campaign.

WANTED committed volunteers, aged 18 years and above, to teach underprivileged children, for one hour a week, in the district of Malkangiri. Ability to speak, read and write Odiya fluently, important. Experience not necessary. All volunteers to receive training. Contact Nethra N, Coordinator (Each One Teach One), 4Literacy, Ambaguda, Malkangiri, Odisha -764045

Subject: Application for the Position of a Volunteer

With reference to your advertisement dated 17 Jan 20xx, I would like to offer my candidature for the position of a volunteer for the ‘Each One Teach One’ campaign. I have never taught but have always desired to lend a helping hand in bettering the society. Presently, I have just finished my class XII exams and have enough time at my disposal. I assure you that I would be dedicated to the position if I get a chance.

I have attached my resume along with.

The efforts of 400 volunteers working with the NGO, 4Literacy, in the district of Malkangiri, Odisha, was lauded by the District Collector, Shri V. Singh (IAS). As a staff reporter of ‘The Odisha Bhaskar’, write a report about this in 120-150 words covering all the details, such as training, teaching and infrastructure involved in the ‘Each One Teach One’ campaign, initiated by the district administration in association with the NGO.

The ‘Each One Teach One’ campaign was a major success. The educational welfare campaign was led by 400 volunteers and was lauded by District Collector Shri. V. Singh. The volunteers educated the children of Malkangiri and imparted basic education about the sciences and languages.

These volunteers were trained for 15 days prior to the campaign. During this training they were sensitized towards the need to pay attention to the granularities of academia. They were given a pre-determined syllabus but were encouraged to come up with innovative methods to teach and educate the children.

These volunteers started their work on 16th November and continued for a period of 2 months until 18 January. They spent their weekends with the under-privileged children and taught them basic writing skills as well as told them stories. They even mentored them and informed them about the career choices that they could avail in the future.

These classes were held in the evening in the government school premises, which were specially requisitioned for this purpose. They had special funds allocated for chalk, paper, and other requirements needed for conducting classes. It was a highly successful campaign and managed to educate and inform about three hundred students, who were then spurred into action and vowed to keep the momentum going.

5. Attempt ANY FIVE of the six questions given below, within 40 words each.

An extremely ambitious workaholic, Mrs. Meenu Sethi has been an educator and mentor for the last 21 years and has now brought her experience & expertise to English ChatterBox. She is both the founder, and the author of this awesome blog.

Stay at the top

Get updates, tricks & tricks and other educational strategies